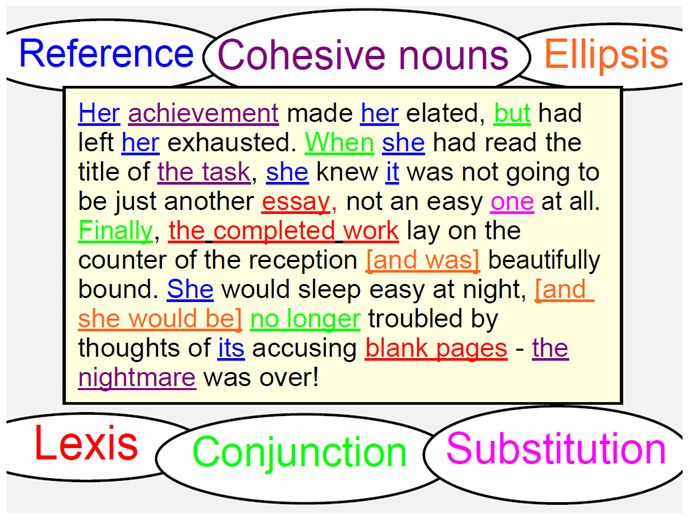 Every writer wishes to make their points clearly to their readers, with pieces of writing that are are easy to read and have logical links between the various points made. This coherence, this clarity of expression, is created by grammar and vocabulary (lexis) through cohesion. This is the “glue” that joins your ideas together to form a cohesive whole.

In this Learning Object we are going to focus on how this is done, in order to assist you when you come to write your next assignments and in your reading. In reading, if you understand how the author makes connections within the text, you gain a better understanding of his or her message. As regards your writing, after analysing the texts in this Learning Object, you should analyse your own writing in the same way. This will help you to realise which techniques you could use more to benefit your reader.

According to the writers Halliday and Hasan (1976), there are six main ways that cohesion is created in a text. These they called: Reference, Substitution, Ellipsis, Lexical Chains, Cohesive Nouns and Conjunction.

Open this Cohesion Presentation PDF document that shows you examples of each of them.

For the following six ways of creating cohesion, select each one to read detailed explanations and examples:

This way of creating cohesion uses:

In this way of creating cohesion you can use:

These techniques allow for the central themes to be reiterated in a way that avoids monotony for the reader.

These words are a kind of lexical reference.

This method of creating cohesion uses one word/phrase to replace a word/phrase used earlier. For example,

In this way of creating cohesion, words are omitted because they are understood from the context. e.g.

This type of cohesion includes:

Then try this Cohesion quiz to test your memory of the terms.

Activity 2: Highlighting cohesion in a text

For this activity you are going to read the short narrative text below, which is a piece of creative writing about a student, and then complete an exercise in highlighting the cohesive words, using colour codes. First, read the text quickly and try to think of a title for it.

The student sighed as she handed in the assignment, at last it was finished. This was the most difficult piece of writing which she had been set, but she had completed it. The ‘magnum opus’ was 10,000 words long. This project, though not quite a dissertation, was still the longest piece of academic writing she had ever written. She had thought she would never complete it and it had taken all her strength to do so.

Her achievement made her elated, but had left her exhausted. When she had read the title of the task, she knew it was not going to be just another essay, not an easy one at all. Finally, the completed work lay on the counter of the reception [and was] beautifully bound. She would sleep easy at night, [and she would be] no longer troubled by thoughts of its accusing blank pages – the nightmare was over!

The original title of the piece of writing was “The Assignment”.

You can download this Feedback 1 PDF for a summary of the answers to the task.

Activity 3: Cohesion in a discursive text

In this exercise you are going to see how the 6 ways of creating cohesion are used in a short text arguing in favour of working in groups as a way to learn better in class. Before you read the text, you might like to predict what the arguments might be in favour of and against classes being organised to work together in this way.

To do a series of exercises to raise awareness of different forms of cohesion used in academic writing, try these interactive cloze exercises.

Activity 4: Colour coding the cohesion in the discursive text

Now, we are going to use the same text to see how your awareness of cohesion is improving.

Read this longer discursive text about working in groups. As you read, notice the different forms of cohesion that are used in the text. After you’ve read it, move on to the colour-coding exercise that follows.

“Working in groups is a bad idea because it encourages weak students to let the others do the work.” Discuss

The idea that working in groups is a bad thing is fundamentally mistaken because, overall, the advantages of this way of configuring the class outweigh the potential disadvantages [of this way of configuring the class]. In groups there is the opportunity for peer teaching, which can often be invaluable. In addition, lessons organised in this way become less teacher-centred. Moreover, in life today, team-working is a feature of every workplace and one of the roles of university education is to provide a preparation for students’ future careers.

Firstly, peer teaching can contribute to effective learning in most classroom situations. Many students (especially in large classes) can benefit from this approach. Weaker students are often less afraid of making mistakes and taking risks in front of their peers, than in close contact with their teacher or in front of the whole class. Also, with regard to the stronger students, a perfect way to consolidate their learning is to transmit that knowledge to others. Furthermore, most pedagogic approaches today concur that a lesson that is focused on the teacher at all times, is one from which the students are unlikely to benefit. Certainly, some classroom activities, like project work for example, are best conducted in small groups. The teacher as the source of all wisdom standing at the front of the class, the ‘jug and mug’ model of education, is not only antiquated, but also ineffective.

A further benefit of group-teaching is the preparation it provides for working in teams. In a great variety of careers today, the employees are asked to, and are judged on their ability to work in teams. Group working in class represents basically the same concept. The same skills are being tested and developed – interpersonal skills and emotional intelligence, to mention just two. In business today, the ability to lead effectively and to support one’s peers is prized almost above all other skills.

In conclusion then, while it may sometimes be true that the weak students may ‘take it easy’ sometimes in groups, allowing others to work hard to compensate for their laziness, if the lesson materials are interesting and the teacher motivating, this is a rare occurrence. As outlined above, there are so many ‘pros’ to this method of classroom configuration that these easily outweigh this somewhat questionable ‘con’.

You can download this Feedback 2 PDF document for a summary of the answers to the task.

Cohesion has a strong connection to coherence (logic and meaning). In fact, cohesion is the grammatical and lexical realisation of coherence at a profound level within the text. It is what makes a text more than just a jumbled mixture of sentences.

For websites with more information and exercises to raise your awareness of cohesion and the way we organise information following a ‘given-to-new’ pattern, we recommend the following websites:

Lubelska, D. (1991). “An approach to teaching cohesion to improve in reading” in Reading in a Foreign Language, 7 (2)