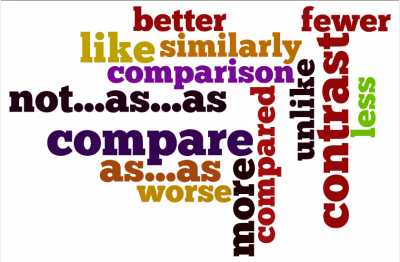 Frequently in academic writing, the author needs to compare or contrast different theories or opinions. At other times or in other disciplines, the need to contrast or compare different statistics or data often arises. Therefore it is helpful for you to have a good command of the basic structures needed to make such comparisons and the linking devices used to fluently connect them within paragraphs and essays.

You may wish to attempt the exercises in Activity 1 by testing the grammatical knowledge that you have already acquired. Or, if you prefer, you can revise the basic rules by following this Comparatives PDF document, and then do the exercises to check your understanding.

Exercise 1: Use the text entry box to rewrite the following sentences using a negative followed by as/so…as or such…as. Here are two examples:

a) The number of students per school in the state sector is considerably greater than in the private sector.

⇒ The number of students per school is not nearly as great in the private sector as in the state sector.

b) It is predicted that the percentage of students failing will be higher than in the first year.

⇒ It is predicted that there will not be such a high percentage of students failing as in the first year.

1.) It can be argued that no other trend was nearly as/so concerning as this one.

2.) Although all the various theories have something to recommend them, some are not as/so good as others.

3.) Of the forty women, twenty-six claimed that their husbands did not work as/so hard as they did.

4.) Some firms are notas/so well-equipped as others to create new advantages of this kind.

5.) It suddenly appears that pragmatism does not fit our legal practices as/so well as conventionalism (does).

6.) Marx did not do as/somuch as Lenin (did) to contrast these administrative principles with the bureaucratic workings of the bourgeois state.

7.) The original option does not go nearly as/so far as the amendment that is now before us.

9.) A dominant adult cat does not approach another adult in as friendly a way as it does a young cat.

Exercise 2: Use the text entry box to rewrite the following sentences using a comparative structure and than in the same way as shown in the example below:

The finest champagnes do not have as great a potential to age in an interesting way as the more common ones.

⇒ The more common champagnes have a greater potential to age in an interesting way than the finest ones.

1.) This argument is reinforced by observations that these patients consult more often than other patients after a stressful life event.

3.) The electorate in Berlin have more confidence in the government than the voters in the provinces.

5.) The equipment prices turned out to be lower than was originally estimated at the start of the financial year.

6.) The emergency services did less than they should have done on this occasion.

8.) After the reforms, the tax system was less effective at redistributing wealth than before the changes were made.

9.) Scotland never does as well as the rest of the UK when it suffers from socialism and its legacy.

10.) The artistic approach produced better results than the scientific way of working.

You may wish to attempt the exercises in Activity 2 by testing the knowledge of linking expressions that you have already acquired. Or, if you prefer, you can check how they are usually used by following this link Linkers for Contrasting then do the exercises to check you have understood.

For each of the sentences below, choose from the drop down box which of the linking expressions would fit best in the gap.


1.) ____________ the paperwork is still time-consuming, it was much more complicated before the government reforms.

Although the paperwork is still time-consuming, it was much more complicated before the government reforms.

The U.K. in common with Greece has an enormous financial deficit to manage.

The accused was acquitted. Nevertheless, he went on to commit many other crimes in the next ten years.

The presenter from Japan was nervous. On the other hand, the speaker from China seemed full of confidence.

Much, though not all, of these regulatory changes were of benefit to both countries’ economies.

It is helpful for all those who need to write in an academic context to practise the structures used to compare and contrast information. We can use “as…as”, or “not…as/so…as”, with the base forms of adjectives to describe how similar two things are, in various respects. We can also use “not… such…as” with nouns to talk about similarity in the same way. Similarly, we can use comparative adjectives with “than” to make comparisons and the meaning is essentially the same. When connecting ideas that are compared or contrasted in text we can use a variety of linking expressions: “in contrast to”, “on the one hand”, “on the other hand”, “although”, “though”, “even though”, “nevertheless” and “however” can all be used for contrast, while “similarly” and “in common with” can be used to describe shared features.

The following website contains further explanation and practice of this area of grammar: Using English for Academic Purposes: Comparing and Contrasting.

Books with explanations and exercises to practise comparing and contrasting: